MINUTES of the Council meeting held on Wednesday 8th January 2020 at 7.00pm in the Committee Room at the Festival Hall, Caistor Road, Market Rasen

The Mayor wished all present a Happy New Year and welcomed everyone to the meeting. Mrs Lucy Waller was introduced as the new Clerk to the Town Council.

2. Apologies for absence and reasons given

The requirement for a replacement flag at the Old Police Station and a leaking water hydrant on the junction of King Street and Mill Street were discussed.

• Flag to be replaced
• Leaking hydrant to be reported

5. To receive any declarations of interest in accordance with the localism Act 2011 and to receive any applications for dispensation in relation to Disclosable Pecuniary Interests.

However, Councillor S. Bunney later made a declaration of interest during Item 13 as an item of correspondence was discussed relating to planning application 140365 /133156. It was noted that Councillor Bunney owned land adjacent to the planning site.

6. Notes of meeting of Council Meeting held on the 4 th December 2019

It was RESOLVED to accept the minutes of the Full Council Meeting held on 4th December 2019 as a true and accurate record of the meeting, subject to some minor grammatical amendments.

Councillors S. Bunney and N. Brooksbank abstained from the vote.

The Council reviewed action points from Council meeting held on the 4th December 2019, the following points were highlighted:

• No response or action had as yet resulted from Councillor M. Lakin Whitworth ’s reporting of highways defects on Union Street and Chapel Street.
• Councillor J. Matthews confirmed that he had had sight of the proposed plaques for the Chatty Benches and had provided the Market Rasen Town Council Logo for incorporation.

Members noted that December had been a busy month for civic attendances including:

No report was received due to recent Staff changes and illness.

10. Report of the County Councillor

• Debbie Barnes’ appointment as Chief Executive of Lincolnshire County Council.
• Work on Lincoln Bypass to commence 20/01/20202.
• Substantial investmen t in local firefighting equipment.
• Changes to local speed limits on Linwood Road and on the A46.
• Parking and safety issues to be considered around De Aston School and the Primary School.

11. Report of the District Councillor

• An upcoming meeting with Lincolnshire's Police and Crime Commissioner
• The availability of grants from West Lindsey District Council (WLDC) for victims of residential flooding.
• The price for WLDC Garden Waste services (Green Bin) was to remain static at £35.
• Public Wi-Fi was to be reinstated at the Festival Hall following its disconnection in error.

The following accounts for payment were tabled: 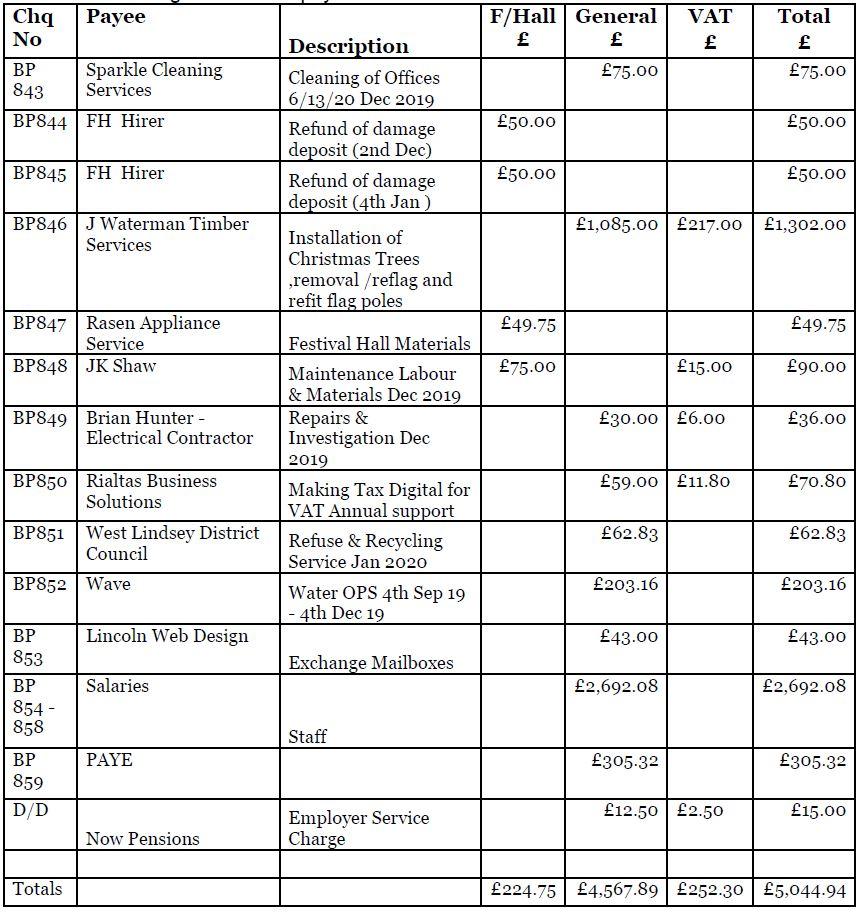 It was RESOLVED that the payments totalling £5044.94 be approved

It was confirmed that damage deposits for the Festival Hall included loss of /damage to crockery.

It was requested that the Clerk report back to Council on the frequency of reductions to deposit refunds.

A list of correspondence of note since the previous meeting was tabled.

The following items of correspondence were mentioned:

• A letter thanking the Council for the use of the Festival Hall and praising a staff member for their assistance.
• A copy of a Neighbourhood Watch group response to planning application 140365/133156.
• An email thanking the council for the Christmas Market.

15. Progress reports from Projects Groups (Project Leader will bring this for discussion if clarification is required by the Council)

Members noted that an inventory had taken place and following 5 years of use it would be necessary to spend £394 .08 + VAT to restock banqueting stock to original standards.

It was RESOLVED to authorise expenditure of £394 08 + VAT to restock banqueting stock and to review deposit and damage charging procedures.

Old Police Station - Members noted that damp had been identified by tenants and this was currently under investigation.

Points of note were:

• A Community Business Award will be launched November 2019 and will be presented at the Love Market Rasen Race Day in February.
• There would be six races in total one of which would be named the Town Council Race

18. Discussion on Live and Local Strategy

Discussion took place regarding the cancellation of the December Live and Local Event and the financial implications of this. Marketing strategy for future events was discussed.

It was confirmed that the application had been submitted.

Councillor S. Bunney tabled a report detailing the general description of intent for the proposed pocket park area at land off Chapel Street and highlighted that it would not be possible to apply for external funding until a minimum 5 year occupancy could be legally agreed.

23. The meeting was adjourned for any public participation for clarification for agenda points (5 minutes Clarification of the reason for an increase in precept was sought. It was noted the increase was 2.5 % which represents inflation and increases in salary and pension costs due to changes in national legislation.